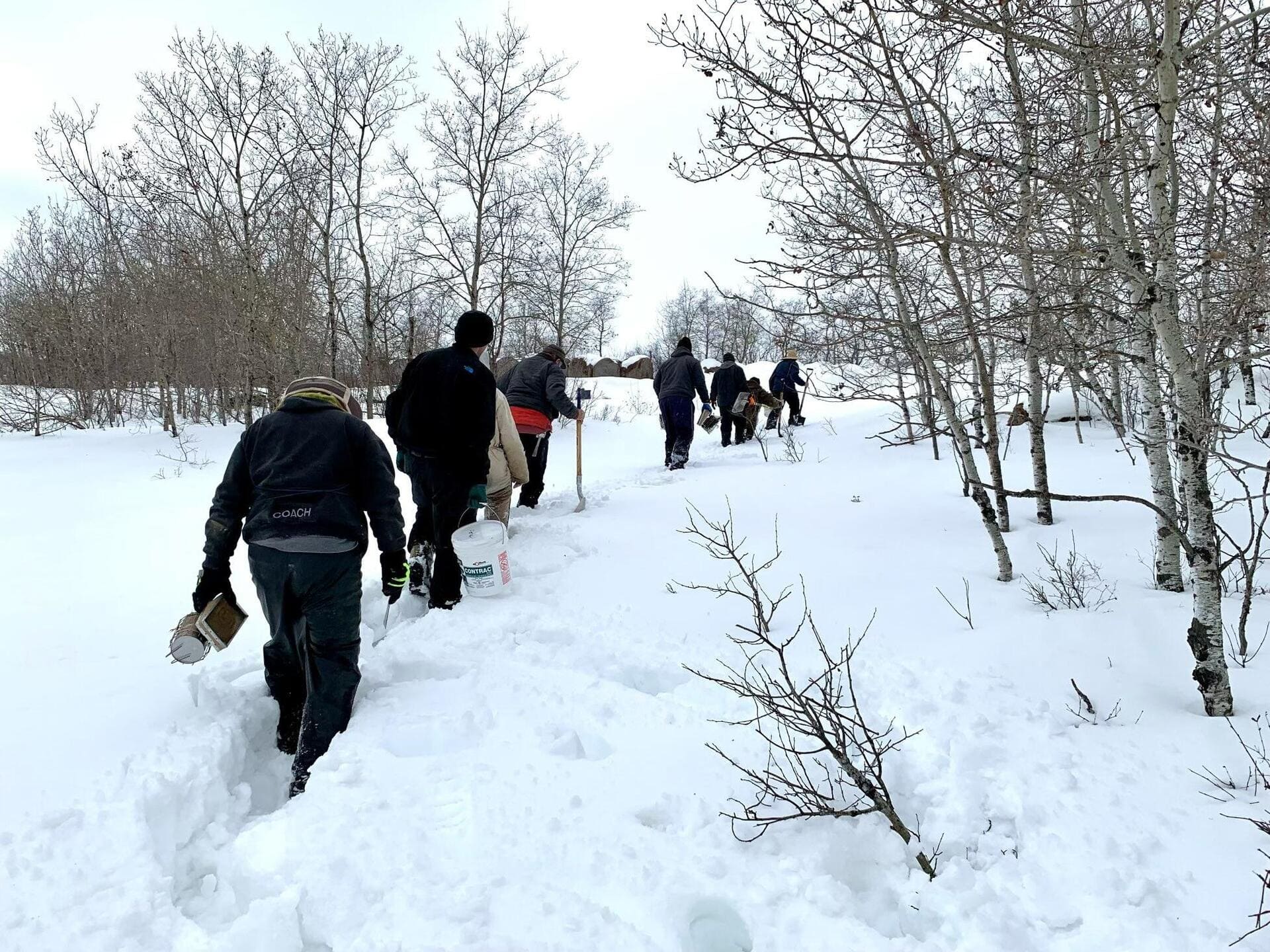 The 2021-2022 winter and spring of 2022 were devastating for Canadian beekeepers. I posted previously on how the extreme honeybee colony winter losses affected beekeepers across Canada. In this follow-up post I will update on how the ripple effect is not only making it challenging to make a honey crop this year, but is threatening to carry forward into next year, even if we do see a return to more “normal” weather and beekeeping conditions.

Tim started breeding queens over 30 years ago shortly after Canadian honeybee import regulations changed. New regulations placed restrictions on imports of bees in an effort to prevent the spread of disease and pests that had not yet reached Canadian bees. Breeding our own queens has provided many long-term benefits. By carefully choosing the breeder queen stock that we use to raise new young queens, we can select for traits such as honey production, disease resistance, non-defensiveness (it’s great to get stung less!), and other secondary traits. Perhaps the most important advantage to breeding our own queens is that we choose breeder stock that has proven themselves to be adapted to our specific geographical and climactic situation. Honeybees imported from California or Australia, or even other parts of Canada may not thrive as well in our area, with its extreme climate and intense, short summers, as they do where they were raised.

Wendell Honey’s queen breeding team raises hundreds of new queens by grafting young female worker bee larvae (daughters of selected breeder queens) into plastic queen cups and then placing these larvae into a hive that is intentionally made queen-less (the queen is isolated from the worker bees). Because the survival of a honeybee colony depends on the presence of a fertile queen bee, a queen-less hive will desperately try to raise new queens by feeding royal jelly to young worker bee larvae. A diet of royal jelly shifts the development of the larva from a sterile worker be to a fertile queen bee. The queen cells (the plastic queen cups with developing queen pupae inside) are left to mature in the queen-less hive until they are about to hatch. We have an excellent video on raising queens here.

A day or two before they hatch, the queen cells are removed from the hive and each one is placed into its own nucleus hive to hatch. A nucleus hive – called a “nuc” for short – is basically a miniature honeybee colony (we use 5 frames of honeycomb in our nucs, compared to 20 frames in the production hives). To make a nucleus colony, we start with a couple frames of honey (food for the bees), a frame with some pollen (food for the bee larvae) and an empty frame (for the queen to lay eggs in). We add a frame of worker bee brood (preferably older pupae that are just about to hatch into nurse worker bees), taken from an existing colony to complete the 5-frame nuc. We also need to give the nuc some worker bees (especially young, nurse bees). A common method of making nucs is to take some bees and brood, often just enough to make a single nucleus colony, from each healthy regular honey-production colony. The disadvantage is that this can weaken the donor hive and decrease its honey production. Another method is to sacrifice one honey-producing hive by dividing its brood and bees into several nucleus hives. Other beekeepers simply split a production hive into two hives – one keeps the original queen and one gets a new queen. At Wendell Honey we don’t like to sacrifice, weaken or split our production hives so we keep 575 smaller “brood donor” hives which are used specifically for donating bees and brood to make nucs. Since we continually weaken these donor colonies by taking their bees and brood, we don’t expect to harvest much honey from these hives. Instead of producing honey, these donor hives form the backbone of sustainability of Wendell Honey Farm by supplying us with bees to make new nucs and raise new queens each summer.

Making up new nucleus hives is coordinated to coincide with the queen cells getting ready to hatch so that the nucs are ready just in time to receive the ready-to-hatch queen cell. Over the next few days, if all goes well, the queen hatches out inside the nuc, flies out to get mated, and returns to her nucleus colony which then becomes a fully viable honeybee colony with a fertile, egg-laying queen. The young colonies grow and establish themselves over the remainder of the summer and are then wintered indoors. The following spring the nucs can be used either to replace winter colony losses or they can be combined with a weaker or queen-less hives to rescue the failing production hive. Some beekeepers’ primary or only business is raising queens and nucleus colonies to sell to other beekeepers, rather than producing honey. At Wendell Honey we are more-or-less self-sufficient regarding queens and nucs: our goal is to make enough nucs in the summer that we won’t need to purchase any the following spring and summer. We seldom sell any nucleus hives, although we occasionally will share breeder-queen stock with some local beekeeper friends.

The beekeepers at Wendell Honey Farm work hard to ensure that every hive enters the winter in a state of optimal health with enough stores of honey and pollen to survive the winter. But, even with the greatest of care, and even in the gentlest of winters, some colonies inevitably die over winter. Each spring these “dead-outs” are replaced by colonies that started out as nucleus colonies the previous summer and have grown strong enough to be “promoted” to become a full honey production hive. Later in the spring and summer, during the pre-honey-flow colony checks, nucleus colonies are used rescue failing production hives by boosting bee population and provide young, healthy queens to queen-less hives, hives with a failing queen, or weak or diseased colonies. Remember that a honeybee colony needs a healthy queen bee to survive. Our supply of nucleus colonies with young, healthy queens is critical to sustainability of our beekeeping operation.

The Unprecedented Challenges of 2022

The 2021-22 winter was the worst in the memory of almost every Canadian beekeeper. Honeybee colonies died off in unprecedented numbers. Beekeepers across the country faced the costly challenge of replacing those winter losses with new colonies if they hoped to have a decent harvest in summer. One common way to replace winter losses is to purchase nucleus colonies from beekeepers that raise and sell queens and nucs. However, across Canada, the beekeepers that normally supply the nucs were also hit hard by the extreme winter: supply of domestic honeybee colonies was severely affected. Bees can be imported from countries like Australia, usually at high cost. However, effects of covid on the supply chain made it nearly impossible to import honey bees, even at extraordinary prices. 2022 should have been a good year for Canadian beekeepers as commodity honey prices had finally rebounded from more than five years of unsustainable, artificially low prices created by global honey adulteration and honey laundering. Instead, beekeepers faced the heartbreaking disaster of losing a third to a half, or even as much as 90%, of their honeybee colonies over winter. Beekeepers across the country in desperate need were finding it almost impossible to find new colonies at any price. Many beekeepers faced looming bankruptcy.

Wendell honey farm was not spared: we faced our highest colony losses ever. Fortunately, we had invested heavily in making nucleus colonies in the summer of 2021. These nucleus colonies, wintered indoors, and without stores of honeydew honey, had high survival rates. Still, our higher-than-normal number of nucs was insufficient to replace winter losses. We purchased any nucleus colonies we could find (which wasn’t enough), despite the high selling prices.

Compounding the issue was the fact that many of the honey-producing hives that did survive the winter were severely weakened. If these decimated colonies hoped to produce a honey crop, they needed help in the form of extra bees and/or brood, or even adding an entire nuc to the colony, giving it a second queen. Normally, during spring colony checks, we can take some bees and brood from stronger hives and donate it to help the weak hives. Normally after replacing winter dead-outs with nucleus hives, we have excess nucs to help the weaker/failing production hives. Not so in the spring of 2022: strong hives were very hard to find while weak hives needing help were in overwhelming supply. The long, cold spring of 2022 only worsened the issue and led to ongoing colony deaths and increasing numbers of hives that needed help. Our supply of nucs from last summer was depleted simply replacing the unprecedented winter losses.

The Beginning of the End?

The disastrous effects of winter weren’t limited to our decimated production hives. Our “brood donor” hives, wintered outside and coincidentally in areas where the rare autumn honeydew honey (see last post or this video for details on effects of honeydew honey) was most abundant, fared especially poorly over the winter. Remember that by enabling us to make new nucleus colonies and raise new queens each summer these brood-and-bee-donor hives allow us to maintain the numbers, health and viability of our ~4000 honey-producing hives. This spring they were so weak it was hard to find any hives that could donate a frame of bees or bee brood. No nucs in 2022 would mean no replacements for 2022-23 winter losses, potentially initiating a very scary downward spiral.

As the Wendell Honey beekeeping team resorted to taking brood and bees from weaker-than-average production hives to help the even-weaker hives and make nucleus colonies, the stresses of making any honey crop at all in 2022 took its toll. After weathering 5 years of mostly below-cost honey prices, now that the price had rebounded, we worried that the bees would not be strong enough to make a honey crop. Our talented beekeeper videographer, Brent Ross, has put together an excellent short documentary on the extreme challenges Wendell Honey beekeepers faced in 2022. Stay tuned for further updates.